For today’s meal we decided to mix things up a bit and combine two different cultures into one yummy meal; from the East of the Mediterranean we borrowed a stuffed zucchini dish, while we took gazpacho from the West.

Our decision for the gazpacho was a result of a happy problem: we just had too many tomatoes that needed to be used! Originating from Spain, this cold soup was a favourite of farmers and shepherds in the south of the country during summer months. It later came to spread throughout Spain, and has since come to be consumed around the world. Traditionally the soup is made of tomatoes and other vegetables, but you can also leave out the tomatoes and use peppers, onions, cucumbers, garlic, and bread crumbs.

For our main course though, we jumped on the stuffed food wagon. Stuffed vegetables are very popular from the Balkan Peninsula all the way to India. Though peppers are the most common, many other things such as tomatoes, grape leaves, and even onions and garlic can be used. These dishes are all collectively known as “dolma,” which means “stuffed” in Turkish (exactly what all of our bellies are after a yummy vegan lunch! They probably don’t use this word for that in turkish though…). But why do stuffed peppers or something so common when we could try something a bit more wild like stuffed zucchini? And so an idea was born!

Recipe, preparation and the price of the meal

Our first stepped was preparing our chilled soup. Taking our lovely, juicy, ripe tomatoes, we cut them into large chunks before throwing them in a pot with a cut up red pepper, half a red onion, and a clove of garlic. We added some water so that we could get our trusty stick mixer in there and mix things up. We chose to go with a thicker soup, but you can add as much water as you want to obtain the desired consistency. We seasoned our soup and then hid it away in the fridge so it could get nicely chilled. While the soup did its soupy thing in the fridge, we tackled the main course.

We had previously soaked some green lentils, and then we brought these to a boil, as well as boiling diced potatoes and buckwheat, though each in its own pot. While these things were simmering away, we chopped up our zucchinis! We chose nice small ones to ensure they could be easily cut through with just a fork or spoon when being eaten. We chopped the ends off and hollowed out the seedy centre. When the buckwheat was halfway cooked, we seasoned it with salt and our Indian spice blend before adding flax flour to bind things together better. This mixture was then stuffed into the zucchinis, which were placed on a baking tray ready to go into the oven!

We baked them long enough to soften the zucchini and to get the buckwheat into a fully-cooked state (because crunchy, raw buckwheat groats is hardly what you want in a nice, soft, stuffed vegetable… or anywhere else really). When the potatoes were sufficiently cooked we poured off the excess water and took our stick mixer to them, creating a purée. We then added the cooked green lentils and mixed this together. We chose to not purée the lentils in because we wanted the texture of having them whole, but you could just as easily whir them right in with the potatoes. To round the meal out, we made a celery salad and canned beans with some pumpkin seed oil and salt.

The price for this lunch was 6€, which comes out to 1.5€ per person. We calculated this with the price for the tomatoes and peppers, but for us it was cheaper since we got these things from our garden. Since we don’t all have gardens, we added in the going rate for the vegetables here to give you a clearer idea of the cost.

This lunch contributed 25% of the caloric needs for an average person, and we managed to get well above this amount for many nutrients! This meal had 36% of our daily protein needs, 68% for fibre, 62% for vitamin E, 89% for folic acid, and 106% for vitamin c (thanks, tomatoes!). Calcium, selenium, and vitamin A were a bit short supplied in this meal, but can easily be compensated for in other meals. We also were lacking vitamin D and B12, as is always the case in vegan cooking.

For more information about the nutritional value of the lunch (for example reviews of the individuals amino acids or individual food items), if you have any questions, or if you have suggestions for future lunches or science features you’d like to see on our blog, then write to us at hungry.pumpkin.blog@gmail.com.

Wishing all of our hungry pumpkins bellies as stuffed as our zucchinis! 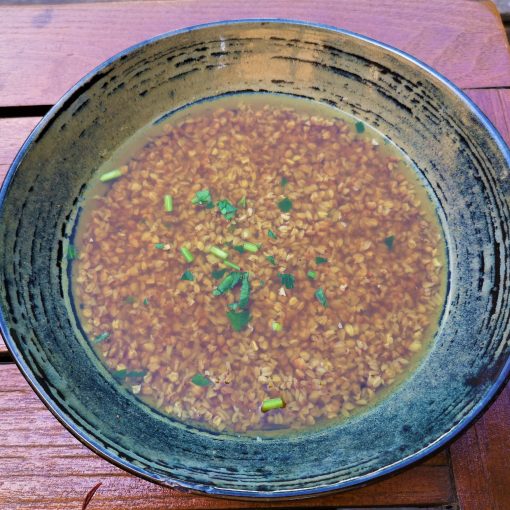 For this lunch, things were a little bit different. When it was still possible we stepped outside of our kitchen and were […] 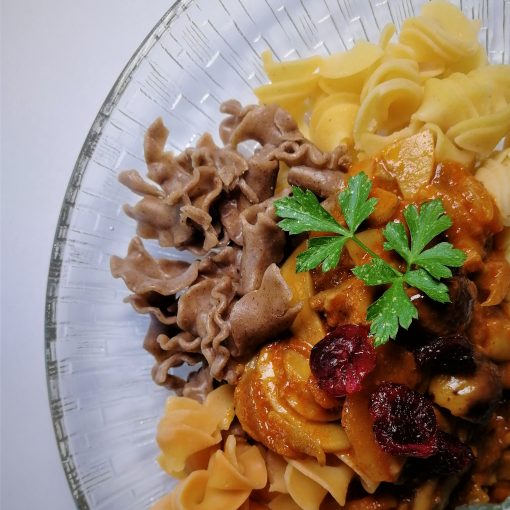 Autumn is the time of year when many edible fruits ripen in nature. Perhaps the most famous example in certain parts of […] 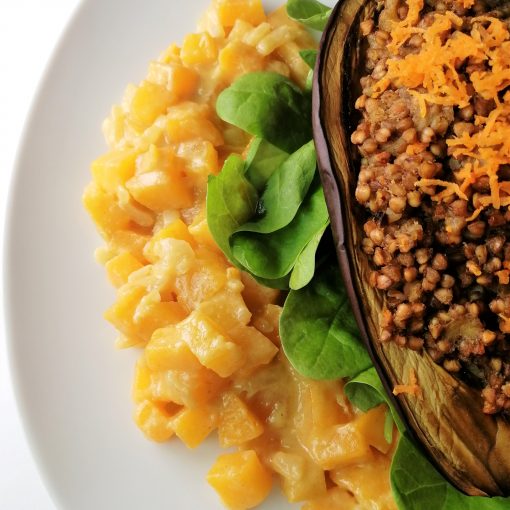