After getting a big squash from our home garden, we decided something had to be done with it! We settled on making a sort of squash goulash.

Squash (Cucurbita pepo L.) and its seeds contain many vitamins and minerals, especially vitamins A, E, C, B2, as well as minerals such as magnesium, potassium, phosphorus, copper, and manganese. If you look on our facebook page you can check out some research on the health effects of squash!

In addition to our squash, we also used green tomatoes that were brought in by our colleague, Nina.

What’s up with green tomatoes?

For many of us, it is difficult to imagine a world without tomatoes! These plants are in the family Solanaceae, placing them as relatives of tobacco, potatoes, eggplants, and bell peppers. Originating in Central, South, and the southern part of North America, tomatoes can vary greatly in colour, shape, size, and taste, but their nutritional content is largely the same. Tomatoes are mostly water, but also contain some protein, carbohydrates, a little fat, and lots of vitamin A and C. Leaves, stems, and green fruits of tomato plants contain solanine, a poisonous alkaloid also found in the green parts of potato plants. Unlike in potatoes though, the amount in the tomatoes (even when green) is so low that they are not dangerous, but you still shouldn’t eat too many green tomatoes. Green tomatoes are, in fact, used in various jams and fried vegetable dishes from various cultures, so we are dipping our toes into this pond. Also, it would be a shame to waste green tomatoes that didn’t mature in time for the autumn.

To prepare the goulash, we started with the squash itself. We cut it up, cleaned the seeds, and removed the outer hard skin. We cut the flesh up into about 2 cm cubes. We also cut up our green tomatoes. The onions were peeled and cut into very thin slices and then fried up in oil. Once the onions had yellowed nicely, we added the other vegetables. We seasoned the goulash with paprika and salt.

To make our mashed potatoes, we cooked potato cubes and chickpeas. These had to be cooked in separate pots as the potatoes needed only 15 minutes to cook while the chickpeas needed an hour despite having been soaked overnight in water. We then mashed the potatoes up before adding our chickpeas and some water and blending everything together before adding some oil, more of the water from the chickpeas, and blending again. Some cookbooks suggest complicated chickpea preparation where you do water changes and peel removal. We did neither of these and had a great mashed dish with no noticeable peels, so no need to worry!

In addition to our main course, we also prepared a black radish salad. We peeled and grated the radish before adding canned beans, pumpkin oil, and salt.

This time for our 4-person lunch, the cost was below 5€, even if we had bought all the ingredients in a store! Since we got the squash and green tomatoes ourselves, we only paid 3€, which is less than 1€ per person! Once again, we’ve shown that vegan eating is really not expensive. However, this is because we have used seasonal foods and made use of our garden, thus avoiding the expensive, processed foods that are targeted at vegans.

Our lunch, as always, covered 25% of the daily caloric needs of an average person. We met almost 30% of our protein needs, with most of it coming from our legumes, though the contribution from the potatoes and pumpkin was not insignificant! Our lunch was also very rich in vitamins and minerals. We covered as much as 60% of our daily need for iron, 88% for vitamin A, and almost 80% for folic acid. We fell a bit short on calcium and selenium, so these should be made up for in another meal.

If you have any questions, please feel free to send us an email at hungry.pumpkin.blog@gmail.com!

Have a yummy week! 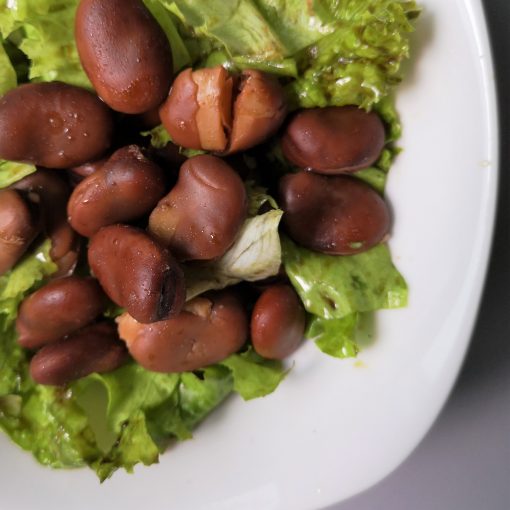 You’ve probably already realized that our lunches are mostly made spontaneously from the ingredients we have available. Just like at home: you […] 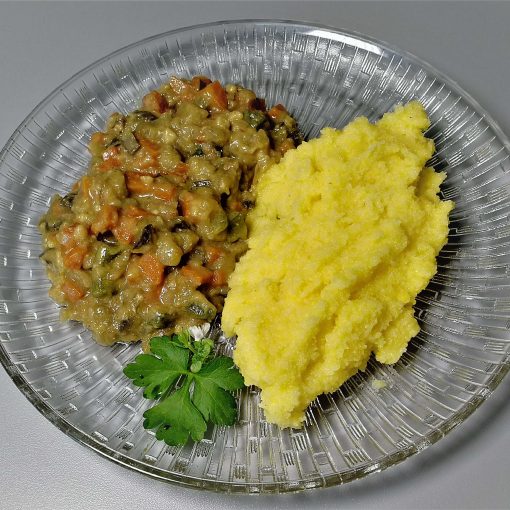 One of the main things we advocate in this blog is that vegan food can be very simple. Today we get to […]