We’re all familiar with the basic formula that stories should follow: there should be an introduction, a core, and then a conclusion. As much as getting into literary theory would be fun, that isn’t our aim here. You see, it’s not just stories that should follow this outline, but meals too! A meal generally starts with a soup or a salad, continues to the main course, and (of course) finishes with a dessert. But who says this is how it needs to be? At Hungry Pumpkin we are all about breaking down stereotypes, so today’s lunch is without a main course (we can hear you gasping in horror). Despite this, it was a very tasty and balanced meal. Sometimes rules really are meant to be broken.

Continuing our tradition of using various different grains, today’s lunch uses quinoa (pronounced kee-nwa, NOT kee-no-ah). Quinoa originates from the Andes in South America, where it mostly grows at altitudes between 2500 and 4000 m. As you may expect from its particular growing conditions, 97% of the world’s quinoa crop is grown in Peru and Bolivia. Its seeds are small and round, rather like millet, and its culinary applications are similar to those of other grains. From this method of use, we see that it is actually a lot like buckwheat since both are used as grains though they are not part of the grass family. Since technically a grain must come from the grass family, quinoa is actually a pseudo-grain (or pseudo-cereal). This plant bears the Latin name Chenopodium quinoa and is actually much more closely related to beets and spinach than to grasses. In addition to being an interesting plant, quinoa seeds contain as much as 14% protein, as well as being rich in many vitamins and minerals, especially folic acid.

Recipe, preparation and price of the meal

For the soup, we began by chopping up kohlrabi and carrots and throwing them into a pan with some oil. Once these had softened a bit, we added in zucchini and peppers. We cooked the vegetables all together for a few minutes before adding in the quinoa. Shortly after this, we added in our water. Since we have a kettle in our kitchen, we added water in that was already hot to save time in boiling. You can do this, or just add in room temperature water and let your stove do the work. Before the soup had finished cooking, we added half a can of chickpeas (along with the brine) that we had leftover. We chose to season only with a bit of salt, but others would also be great (oregano, marjoram, pepper, cumin… the list is endless and is limited only by your imagination and the sort of taste you want to create. If in doubt though, don’t be afraid to keep it simple).

Our local store has a wonderful habit of putting produce on clearance prices to sell it before it goes bad, so we were able to get some vegetables for the salad at a great bargain; this led us to use lettuce and arugula in today’s salad, which we then seasoned with olive oil and salt.

Arugula (also known as “rocket” to some people) has a distinctive aroma and a slightly bitter taste with a bit of heat to it. This particular taste/smell can be linked to more than 10 different substances working together! This plant is in the family Brassicaceae along with cabbage and cauliflower. This family is known for containing many sulfur substances from the glucosinolate group. When in the plant, the glucosinolates are not volatile, however, once you begin to chew them you damage the cells (oops!) and the myrosinase enzyme begins to work, thus forming volatile, aromatic, and burning isothiocyanates from the glucosinolates. This same process actually occurs in all plants of this family, but the difference in flavor between the vegetables is due to the variety of glucosinolate and isothiocyanate that is present. In arugula leaves, 4-mercaptobutyl glucosinolate predominates, thus being an integral part of its unique taste.

Another important part of today’s lunch was dessert! Though we wanted to throw ideas of the stereotypical mal out the window, everyone loves dessert. We decided to make chia seed pudding to satisfy these sweet teeth. To begin, we blended up bananas and apples with our truly stick mixer. Since the fruit was soft enough, we did not need to add water, but if your fruit is quite firm it may be necessary to add a couple of spoonfuls of water. To keep the fruit from going brown, we also added in some lemon juice. We then added in our chia seeds, which we had previously ground up in a coffee grinder. Chia seeds are one of the richest vegetable sources of omega 3 fatty acids, but this wasn’t why we added them. These cute little seeds contain polysaccharides that form a gel when mixed with water, thus giving us a great pudding textured! Unlike agar, you don’t even need to heat them up. We then divided up our mixture into the serving bowls and placed them in the fridge for a few hours to solidify to the appropriate consistency. Before serving, we added some strawberries and blueberries for some nice color, nutrition, and even more taste!

The total price for our 4-person lunch was 6.49 €. Though we normally end up at about 1 € per person, you can see that today’s lunch was a bit more costly. Our main culprits for this were the quinoa (since it is imported) as well as the strawberries and blueberries.

As usual, our lunch was measured to cover 25% of the daily caloric requirements of an average person. Today we did quite well nutritionally, reaching or surpassing 25% daily requirements for all nutrients except vitamins B12 and D, which cannot be obtained from plant foods anyway; a daily multivitamin can easily fulfill this need. For folic acid, we actually reached 60% of our daily requirements just with this one meal! As we mentioned, quinoa is rich in folic acid and provide the most of the meal (69 μg), but other sources were not far behind (lettuce: 47 μg. Chickpeas: 25 μg. Zucchini: 21 μg. Bananas: 20 μg).

Wishing all you hungry pumpkins a sunny weekend!

PS: if you have any questions about today’s lunch or its nutritional value (or if you have suggestions for future lunches) then send them our way at hungry.pumpkin.blog@gmail.com. We look forward to hearing from you! 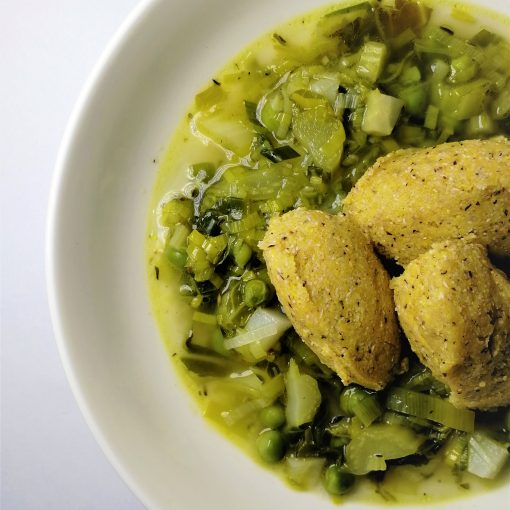 For today’s lunch, we decided to make a simple yet oh-so-yummy leek soup that we dressed up with a buckwheat and corn […]

For today’s lunch, we decided to make a meal with a Russian twist. This culinary adventure began with an appetizer consisting of […]