Today for lunch we prepared spelt noodles with a vegetable sauce and tofu. This time, we also made a dessert: ice cream with hot blueberries and raspberries.

This is the second time tofu is appearing on our menu, so it seems about time to talk about this important staple of vegetarian and vegan cuisine.

Tofu is a food product produced from soy. It may look like an odd block of cheese, but this soft white block is vegan friendly. Traditionally, tofu has been associated with Asian cuisine, where it has been used in China for more than 2000 years (try eating soft tofu with chopsticks and you’ll gain a new appreciation for the dexterity and skill of the peoples of the world who primarily use chopsticks for cutlery!).

Even though it is not a cheese, the process of making it is actually rather similar! By coagulating soy milk, a curd is made (referred to as a douhua in China). This coagulation can be carried out in several ways, most often by adding naturally soluble calcium sulfate. As a result of this process, tofu contains much higher levels of calcium than raw soybeans. The mass is then put into moulds, which are then pressed, thus removing water from the mass and allowing it to solidify.

The main difference between making tofu and cheese is the source of the milk. As much as the mental image is amusing, you can’t milk a soybean plant as you would a cow (you probably figured that one out already, but some other plants of the world DO exude milky substances that people harvest, so it’s always good to clarify!). Rather than getting the milk from the plant, the seeds are collected, soaked in water, and then go through a crushing process. The resulting liquid is an emulsion (mixture of fine droplets) of oil and protein in water that is similar to milk. The mushy solid remains from the process mainly contain starch and fibre (as well as many proteins and fats) and in Asia are called foci and primarily used for feeding livestock. That being said, they can also be used for human consumption.

Tofu can also be found in many different varieties: the main one most people are likely familiar with is the firmness. Silken, medium, or firm tofu describes the hardness. While silken tofu is incredibly soft and ideal for smoothies, baking, and sauces, the firmer varieties are more appropriate for stir-fries, general cooking, and frying. You can also find tofu that has been smoked, or that has added herbs or flavours. There are also similar products to tofu made of peanuts and peas, for example, in addition to its close culinary relative, tempeh.

If you have ever wondered about the difference between tofu and tempeh (an Indonesian invention), it lies in the process and the supplies. For tofu, the milk is used and the solid mass discarded. For tempeh, the whole beans are used and then fermented into a block rather than creating a milk. So tofu is made of coagulated milk of the soybean and tempeh is made of the whole beans that have been cooked and then fermented into a solid mass. As a result, tempeh is actually healthier (you got more nutrients and more fibres), but it is also generally much harder to find in stores and often more expensive. Thankfully, tofu is also packed with lots of nutritional goodness and can be found just about anywhere these days. That being said, if you find tempeh on your grocery store shelves sometime, give it a try! The taste and texture are entirely different and it is definitely an edible experience not to be missed!

First, we filled our pot up with water and set it on the stove to get it boiling. While we waited for the water to be ready, we began to clean and cut the vegetables and tofu. Once the vegetables are prepared, you can begin to pan fry the peppers in some olive oil. We then added broccoli, cauliflower, and a bit of salt. When these had all softened a bit we added water to obtain the sauce consistency we were after, which was followed by chopped tomatoes and spices of our choice. This time we chose to add our Indian spice blend.

While the sauce was cooking all together and we were still waiting for the pot of water to boil, we marinated the chopped tofu in olive oil and spices. This was then added to the sauce at the very end when it was almost ready. Once the water finally boiled (a watched pot never boils, as they say) we added the spelt noodles and cooked them for 3 minutes. Once they were cooked, we added them to the sauce and served.

While we were in the shop seeking inspiration for our main dish, something else caught our eyes. We saw some frozen berries and figured a nice, refreshing dessert would be an excellent idea for what promised to be a very hot day. We decided to prepare vegan ice cream with hot blueberries and raspberries. Before the start of lunch we let the fruit thaw in a bowl. We then cooked it in a pan on low heat where it slowly thickened to form a nice sauce. To serve, we put two scoops of ice cream and one scoop of hot fruit in each bowl. Since we have mint growing quite well on our windowsill, we also decided to add some leaves to garnish.

The price of today’s lunch for 4 people came out to over 7€, which is the most so far. The most expensive part (responsible for almost half of the price) was dessert. This part of the meal contributed less than 10% of our important nutrients, but more than 60% of our fats and sugars (oops… darn sweet tooth!). That being said, we all got 100% pleasure from the dessert, and since 100% is more than 60% obviously that is what we should focus on, right? Simple math! Even with the high budget today, it still came out to less than 2€ per person, which really is far better than you’re going to find in buying a prepared meal anywhere. Additionally, the higher price today does not confirm the false stereotype that vegan eating is expensive. It is more expensive if you buy processed foods; the vegan ice cream, for example, is more expensive than regular ice cream since it is made in smaller batches and sold in smaller volumes. If we made it ourselves (which is actually not very hard to do!) the cost would be much lower. Similarly, the cost of tofu is quite low, but the cost of buying fancy tofu meat replacement foods such as vegan sausages is much higher. Even our fruit sauce could have been cheaper if we had chosen a different fruit such as apricots instead of berries.

As always, the lunch size was measured to cover 25% of the daily caloric needs of an average adult. Our goal is to also have 25% of each of our essential nutrients present as well. Today we covered 36% of our protein requirements, and the only significant shortage was in vitamin A (as well as vitamins B12 and D, of course, as they are not present in plant food. Take your vitamin supplements, pumpkin pals!). The protein intake was 20 g, with the main contributor being the spelt noodles, bringing more than 10 g. The tofu then provided only 3 g of protein. Though the content of protein in the noodles does not differ significantly from wheat, the content is very dependent upon the grinding method; darker flour into which the germ (aleuron layer) is ground is richer than white flour where only the starchy centre (endosperm) is used. When your parents told you to eat that whole grain bread they weren’t kidding!

Well, that’s it for today! As always, if you have any questions about today’s lunch or it’s nutritional value, if you have ideas for future lunches, or even if you just want to say hello (we’re a friendly bunch) then send your messages our way at hungry.pumpkin.blog@gmail.com. Wishing you a nice day and yummy food! 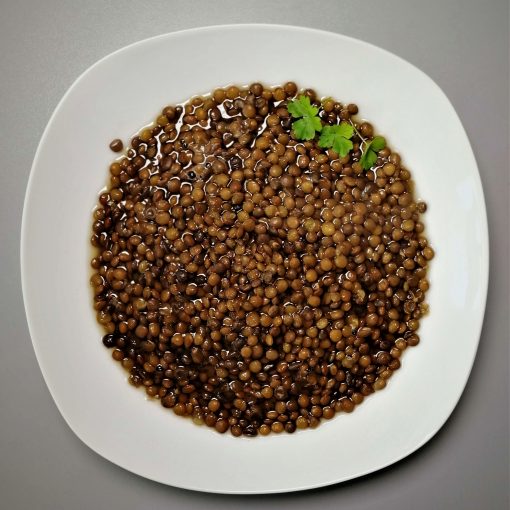 This time around we decided to make lentil soup, buckwheat žganci, and a vegetable side dish. Before we get into the recipe […] 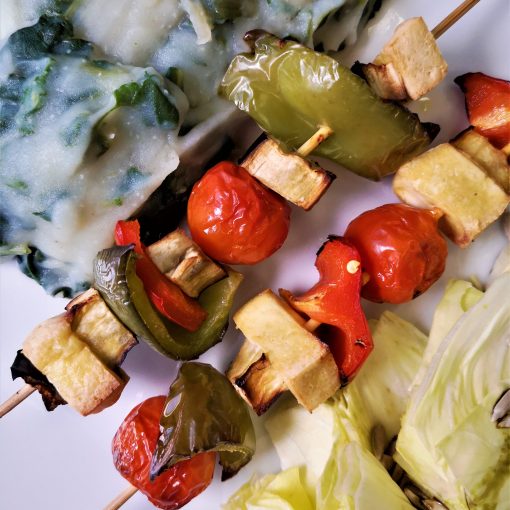 In Dalmatia (the coastal region of Croatia), potato with swish chard is a traditional dish, and among the most commonly served side […] 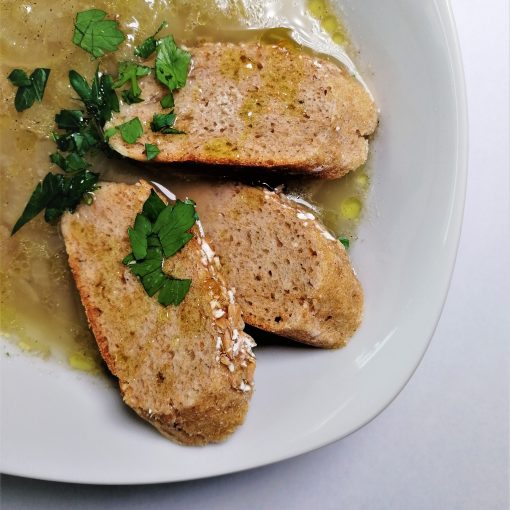 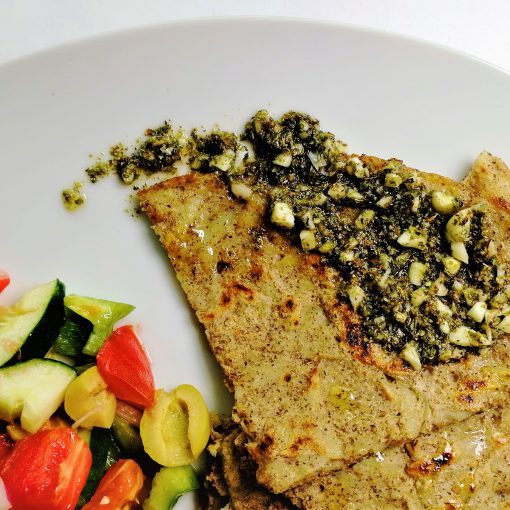