This time around we decided to make lentil soup, buckwheat žganci, and a vegetable side dish. Before we get into the recipe though, we have some linguistics to discuss!

Žganci [click] is a traditional dish from Slovenia and Croatia, two Slavic countries that were formerly a part of Yugoslavia and are situated on the eastern Adriatic coast. This traditional dish is basically like polenta but with buckwheat and was a staple food for poor farmers in the region. Perhaps the most common type is prepared by boiling buckwheat flour until it makes a doughy lump and then crumbling this onto the plate to eat. It can be eaten with milk and yogurt or served as a side to the main dish. Whatever way we look at it, it’s a tasty and intriguing ethnic dish.

On soups and sauces, mains and sides.

If you’re a practical person, you probably have never asked yourself about the difference between a soup and a sauce or between a main and side dish. If you are more philosophically inclined though, you’ve likely found yourself scratching your head before trying to untangle this enigma. Naturally, that’s where we found ourselves with this meal because we couldn’t even decide what to call this dish!

Maybe you feel there is a clear distinction between soup and sauce, but you’ve got to admit, both are liquid dishes, and surely you’ve seen at least one soup that you thought was a sauce or vice versa in your life. Stick with us here: If you eat a liquid dish on its own and use a spoon, you call it a soup. But if you eat the same dish on top of another food and use a fork, you call it a sauce. There’s no actual difference in the food itself, so is it our way of eating it that defines it? This definitional difficulty gets even more challenging when we try to distinguish between main and side dishes; you may eat them from the same plate using the same utensils. Omnivores (or at least the ones who are really into their meat) probably don’t have this problem because the meat on their plate is likely considered the main dish and anything else with it is aside. As the name suggests, a side dish is not the focus of the meal and serves as a complementary (though subordinate) character to your main dish.

To know what a side dish is, we need to know what the main dish is. The very fact that it is called a “side dish” shows that the way we define it is in relation to the main dish it accompanies. Thus (in English at least) this means there are connotations of side dishes being incomplete, not of central importance, likely not as exciting. This way of referring to them also sets them apart as something that isn’t eaten on its own (although if you have the same food and call it an appetizer it’s a different story). The main dish is generally thought of as being the most important part of a meal. Generally, this will be the thing you would mention first when saying what you cooked. “I made grilled tofu with roasted vegetables and garlic bread” shows that your main (or at least what you perceive to be your main) is the grilled tofu and the other things are afterthoughts here, or side dishes. Generally, if it’s an item that you can’t take away without completely changing your notion of what you cooked, then it’s probably the main dish. With knowing all of this theory now though, we are still not sure if it is correct that we called the žganci the main dish and the vegetables a side dish or if it should be vice versa. But hey, enough of this…:-)

What did we cook?

Our meal starts off with our lentil soup. For this, we used brown lentils, though really any type will do. As with all legumes, lentils are best soaked before being cooked. That being said, every different sort of legume has its own ideal amount of soaking and cooking time. We let our lentils soak for one hour and then cooked them for thirty minutes. We wanted our slightly firm, but if you want them mushier in your soup you can cook them a bit longer (creativity is the first rule of cooking!). To season our soup we added only salt and cumin with some parsley at the end, though the options are endless here.

Our cumin is directly from India, though any slightly specialized store would also have it, or you can opt for the variety from your local grocery store.

This spice takes its name from Latin, which in turn can be traced back to Greek. Its proper scientific name is Cuminum cyminum, and it is a member of the plant family Apiaceae along with other culinary favorites like carrots, celery, parsley, and dill. This spice finds its main uses in eastern cuisine, from the Middle East to India. Be careful not to confuse it with caraway, known properly as Carum carvi (a close relative that sometimes is called “Persian cumin” just to mix us all up), which is more often used in western cooking. Though their fruits are similar since they are such close relatives, their taste is very different. Another eastern spice also exists with a similar name and different taste: black caraway/black cumin (Nigella sativa). This plant, however, falls into a different botanical family than the previous two and also is very different in appearance.

In preparing our side dish, the chickpeas (also a legume!) needed to be soaked and cooked separately before being added to the other vegetables and being pan-fried in olive oil. Our first thing into the oil though were the onions. And there were a lot of them. We did this because we wanted to make a sort of vegan chickpea goulash. Once we had the onions going nicely we added green pepper and yellow kohlrabi. The chickpeas went in towards the end, and we kept everything on long enough to get them to the desired softness.

Now, to tackle the buckwheat žganci. There are a number of ways to cook this dish, though two primary methods stand out:

These two methods mentioned, the easiest way is to buy instant žganci, which only needs to be mixed with hot water. You may be able to find this if you live in a larger city that has a shop with eastern European food. Pro tip: Some Russian, Ukrainian, and Polish shops will carry items that are from the lesser-known region where žganci is eaten, so it may be worth checking out. If they don’t have a section for Slovenian or Croatian foods, check for a Serbian section which they are more likely to have. Worst case scenario, you’ll go home with some great pastries and maybe some perogies.

The price and nutritional value of our lunch

All of our ingredients came out to less than 4€, which means less than 1€ per person. That being said, the price of vegetables can vary greatly. We got our pepper on sale since they were starting to wrinkle a little. It may not have been the most beautiful pepper, but there was nothing wrong with it! Buying such vegetables is not only a great life hack for your wallet, but also for the environment. If someone doesn’t buy it, it will just go to waste, and it takes a lot of resources to produce and ship and store foods. We also noticed that onion and lentil prices can vary by as much as a factor of 2… keep those eyes peeled for bargains! Now may also be a good time to explain how we cook. Our meals are based on availability and convenience.

Supplies are mainly purchased at a small store (because it is close by) that has a limited selection, our kitchen has no oven and thus limits us that way, and since we are all busy bees, we aim for dishes that take less than half an hour to prepare. We also avoid processed foods like vegan mayo etc. not only because they are expensive, but because they often come packed full of chemicals we really don’t need to (or want to) be putting into our bodies. Some of our team also cannot eat gluten, so this also affects our choices (can’t have someone going hungry!). So when we plan meals, we don’t actually plan the nutritional value. Of course, we have a general idea of what needs to go into a meal as any person does, but we don’t actually calculate the nutrients until after we’ve cooked. Skeptics of vegan diets (including some nutritionists) will say that a vegan diet is only balanced when extremely carefully planned. As you can see, that’s not true.

Every week we have had good nutrition coming from a quick and very unplanned meal. Diversity is what is important. Besides vitamins B12 and D which are known to be lacking from a vegan diet, the only issues we have had are with calcium and selenium a few times, though other lunches presented this in increased quantities. A healthy diet does not require that each meal presents a perfect balance of nutrients. What matters is that over the course of a few days we get all the nutrients we need. One day a bit low on calcium? No problem, if you eat something different the next day you can more than makeup for that. They say variety is the spice of life, but perhaps it’s more appropriate to say that it’s the source of life!

As always, we also calculated the nutritional value of our lunch. Each of us received our goal of 25% of our daily energy (calorie) intake for an average person. We also covered an appropriate amount of protein with (drumroll) all of our essential amino acids!
In today’s lunch, we were low on our intake for two minerals and five vitamins (printed in bold in the table below). That being said, we covered more than our daily need for vitamin C and almost all of our need for folic acid, and both in just one meal. A dinner later (or even a lunch tomorrow) rich in these other missing nutrients will more than acceptably fuel our bodies.

Have a great sunny week (and try not to think too much about whether you’re eating a main or side dish).

PS: As always, if you have questions about today’s lunch or its nutritional value, or if you have suggestions for future lunches, you can send them to info@hungry-pumpkin.com.

Look forward to hearing from you, and don’t forget to look us up on social media! 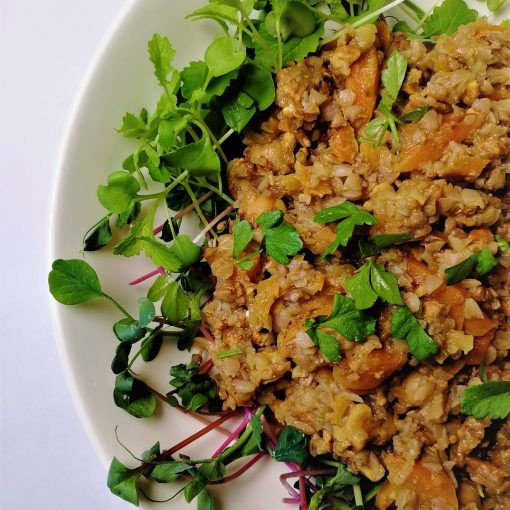 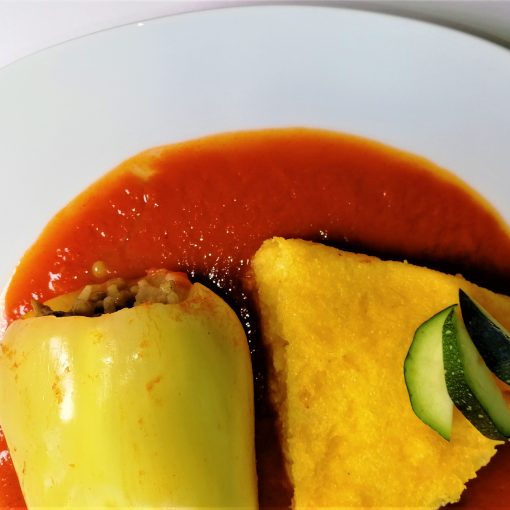 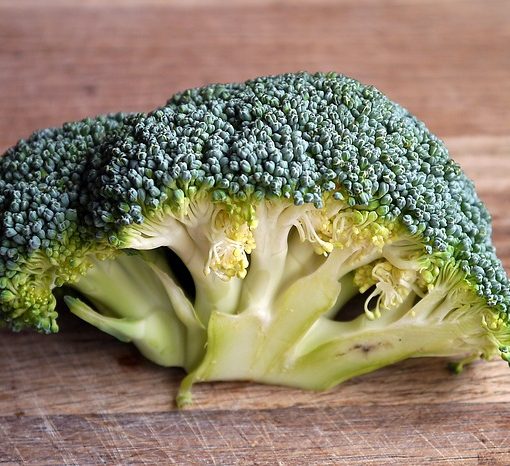